William and Jane (Stewart) Lang arrived in Otonabee township from Renfrewshire Scotland in 1832. The 1819 township survey by Richard Birdsall had marked potential mill sites and William purchased 200 acres on the Indian River. By 1835 he had constructed a dam to power a carding and fulling mill. The original mill measured 41 feet by 44 feet, with heavily mortared limestone walls some 19 inches thick. In the nearby village of Lang (formerly Allandale) Thomas Short had already built a saw mill (circa 1825) and later an impressive grist mill (circa 1846), using the same limestone construction. With access to a grist, saw, carding and fulling mill the local pioneer community flourished.

Carding is the term applied to the process of cleaning and straightening sheep wool fibres in preparation for spinning. Carding raw wool by hand was such a slow process that the settlers willingly paid William 6¢ a pound for machine carding. 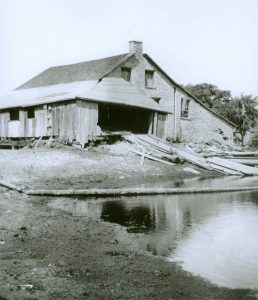 The carded wool was spun and then woven into cloth. Rather than let their valuable 100% woollen cloth shrink in the wash, the pioneers fulled, or purposely shrunk, the cloth prior to cutting it into garments. Fulling by water-powered machinery was a labour-saving process that was greatly appreciated by the early settlers. Fulling at William Lang’s mill cost 8¢ a yard and fulled cloth was prized for its strength and durability. The carding and fulling machines were on the ground floor of the mill and the family lived “above the shop”.

By 1848, William and Jane and their seven children moved across the road to the more spacious limestone house befitting a ‘Squire’, as William was called in later years. William was very active in local politics and served many years as Reeve of Otonabee Township. In 1860, he was Warden of Peterborough County and had the honour of welcoming the Prince of Wales, the future King Edward VII, when the eighteen year old Prince made a brief visit to Peterborough. When the name for Allandale had to be changed in 1872 to avoid postal duplication, the village was renamed Lang, in honour of William Lang.

In 1858 the business was expanded to include a shingle mill. In 1873, Squire Lang retired and leased the mill, dam, house and 200 acre farm to his son-in-law, Richard Hope, for $400 a year. In 1883, a small grist operation was added to grind feed for livestock; only the feed bagger remains today. 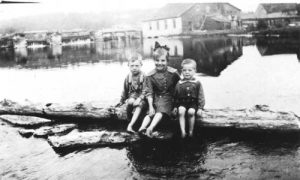 The sawmill in Lang burned in 1873 and shortly thereafter, William and his son-in-law Richard Hope added a saw house on the south side of the building.  From about 1874 to 1892 Richard offered both carding and fulling services and log cutting.  By 1892 the woollen business was discontinued and the Hope family provided much needed lumbering services to the community until 1966. The basic principles of sawmill technology have changed very little over the years. Water from the Indian River flowed through the penstock and turned the two Leffel turbines that could deliver a combined power of 65 horsepower. The generated power was directed, through a series of wooden-toothed and iron gears, belts and pulleys, to the 55-inch diameter circular saw. Downstairs the same turbines also powered an eight-foot lathe (installed c.1890), and in later years, a self-feeding six-gang ripsaw, three-sided planer, and jointer. As recently as 1924, a team of four workers cut over 210,000 board feet in a thirteen week sawing season, March 25 to June 16. Despite William’s gloomy predictions about the future of lumbering in the region, a lot of wood was cut at the Mill, providing an important local service.