(Bob) Rehder has been at the Mill since 2000. Bob was instrumental in saving the Mill and has now retired from active volunteering.  He is a retired electrical engineer with 47 years R&D experience on large power generation equipment with GE Canada plus 12 years of consulting services, with a passion for old machinery that needs resurrection. A tree hugger, caretaker of 100 acres of reforestation who does acrylic painting and short story writing.

Jack Crowther has been a volunteer at Hope Mill since 2002. He is a retired Manufacturing Manager from GE Canada and has extensive experience in machine building and maintenance. Jack enjoys the challenges at the mill as well as the association and interaction with the restoration team. He makes and restores furniture at home with the help of his wife, Ann. Jack also like to fish and duck hunt.

Alex McCubbin has been volunteering at the Mill since 2008. He is retired from Lakefield College School where he taught chemistry for 31 years. Alex works on the saw floor as well as the woodworking shop. He spends his time woodworking in his shop at home, travelling by plane, car and canoe with his wife, José.They also enjoy spending time with their two grand children.

Joe Paterson has been at the Mill since 2002 as the wood shop restoration man. He is a retired owner of a process equipment company. He has restored the workshop and now is building projects there made of Mill wood. He enjoys making Windsor chairs in his home workshop as well as fly fishing , fine food and wine.

Dave Messervey joined the Hope Mill volunteer team in 2012, having recently retired from a 41-year career in engineering, 33 of which with GE Canada, Large Motors division. A professional Mechanical Engineer, he enjoys maintaining and operating mechanical equipment, and when not cottaging or enjoying the outdoors golfing or cross-country skiing, tinkers with all things electrical and mechanical.  He is a neophyte model railroader.

James (Jamie) Crossley started volunteering in 2012. He trained as a mechanical designer and during his working career has worked as plant manager and most recently travelling extensively as a Global Technical Service manager for a steel company. He has always had a passion for wood and music and since his retirement has been able to devote more time both playing and building custom electric guitars (when not with his granddaughters who he and his wife Barb describe as the two sweetest little girls on the planet). 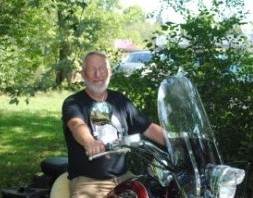 Don Duncan worked for 38 years at Canadian General Electric in the field of industrial electronics (control equipment for paper mills, steel mills, ice breakers etc).  He has spent many years volunteering 16 years as a volunteer fire fighter and later sharing his time between Hope Mill and the Canadian Canoe Museum.  His interests at the mill are working on the saw floor, the woodworking shop and helping with the mechanics on the main floor.  He enjoys woodworking, fishing, riding his motorcycle and travelling with his wife, Mary

Terry Guest has been a volunteer at Hope Mill since 2002.  He has worked in the physical restoration of the building, and as a sawyer, and with his wife, Sue, in the development of the Friends of Hope Mill.  Previously, before retirement, he was involved in the administration of three independent schools and international education.  Terry enjoys woodworking and carpentry in his shop at home, canoeing, camping, fly-fishing and travelling, as well as being an ardent supporter of theCanadianCanoeMuseum. 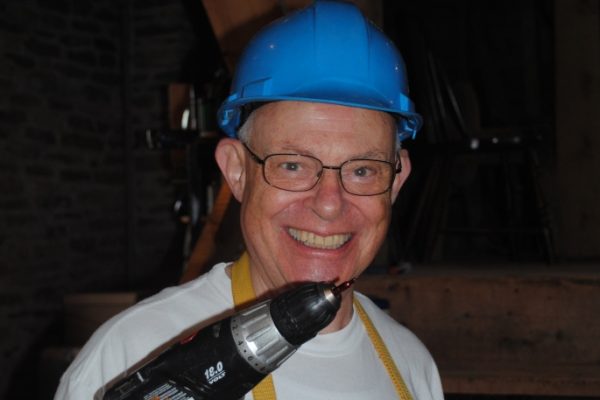 Peter Hale has volunteered at the Mill since 2003.  He is a retired electrical engineer with 42 years experience of start-up and commissioning testing of steel mills, paper machines, mine hoists and subway cars.  Peter has a home metal working shop including a small screw cutting lathe and small milling machine.  He enjoys making small parts to help restoration of Hope Mill machinery and operating Live Steam model railway locomotives 1:32 scale running on Gauge 1 track.  He is also Treasurer for the Toronto Society of Model Engineers. 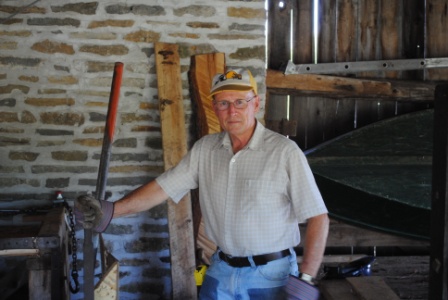 Ken Pirie has been at the Mill since 2002 and retired after 39 years at Canadian General Electric where he worked as a metrologist. He is the lead volunteer in the saw-room and is the main sawyer. His interests outside the Mill are woodworking and model railroading.

David Reeves started volunteering at the Mill in 2012 and is retired from the investment business. He is active on the saw floor as well as doing a variety of odd jobs around the Mill. He has a passion for old cars and old boats. He is also a volunteer at the Canadian Canoe Museum as well as being an avid reader.

Bill Knowles has been a volunteer at the Mill since 2001 and is a retired mechanical engineer. His interests at the Mill include machinery restoration maintenance and improvement. While not at the Mill he enjoys automotive maintenance, hiking and reading.

Dave Bowes has volunteered at then Mill since 2003 and is very active in the restoration and maintenance of the equipment. He is a retired electrical engineer and while not restoring and fixing mill equipment in the machine room he enjoys model engineering and flying radio-controlled aircraft.  He uses his engineering knowledge and his home shop metalworking equipment to design and build his EVIC engines, www.EVICengines.com and when needed to make replacement parts for the mill’s ancient machines

Ken Sunderland is a former high school teacher who recently began helping at the Mill on the sawyer floor. Having spent his early formative years on a 1950’s era farm, Ken likes the nostalgic feeling of being back in the comfort of old, yet noble, machinery. He is a member of the local astronomy club, an improving birder, and still patiently waiting to chalk up a perfect 147 snooker game.

Jim Kingdon started as a volunteer at Hope Mill in April of 2014 as soon as he retired after 31 is years at Quaker Oats/Pepsico in Peterborough. He has had a lifelong interest in the mill as a grandson of Jack Hope and having spent a lot of time growing up around the mill and river. He is currently the 5th generation owner of the Hope family home across the river from the mill.

Richard Hagg joined the Hope Mill volunteer team in July 2016 after a 35 year career as a teacher and administrator. Richard works on the saw mill floor and assists the other members of the volunteer team with what ever jobs need to be done. Richard has a passion for the outdoors, and has volunteered many hours with organizations involved with nordic skiing, canoeing and camping. He has a keen interest in the local history of the Peterborough region, with a particular interest in the history and development of the Trent Canal and the development of canoeing throughout Canada. Richard likes working with his hands and has spent many hours on various building projects for himself and friends.

John Heeringa has been a volunteer at Hope Mill since the spring of 2018. He grew up on a dairy farm and for 50 years enjoyed carrying on the family farm in Cavan, Ontario. His love of the outdoors and animals continues to be his passion in retirement. Over the years he has trained a wide range of animals: cows, hunting dogs, show pigeons, oxen, and more recently horses. He currently enjoys driving his team of Morgan horses. His 4 grandchildren are a source of pride and joy. He and his wife Brenda hope to travel more in the future. At the Mill he can be found working on the saw floor, trimming and sprucing up the outside grounds or helping build fences. As a new member of the team he is inspired by the enthusiasm and dedication of his fellow volunteers.

Gerry Stokman started volunteering in the summer of 2019 He retired from Bell in 2013 after 33 years as a field technician, servicing phones from homes to nuclear plants. After retirement he ran a handyman business and then found a love for carving canoe paddles after taking a course at the Canadian Canoe Museum. More recently he has become addicted to kayaking, hiking and cycling. His three children are enjoying happy active lives. At the Mill he is willing to help out with maintenance and working on the saw floor.

Don Bolton started volunteering at the Hope Mill in 2019. Asa retired construction worker , he really enjoys his Tuesdays at the Mill. According to him , there is nothing like the smell of fresh sawdust in the morning . In his off hours Don enjoys wood working in his garage and renovation projects . He and his wife Gerrie spend  the winters in Florida with the grandchildren.